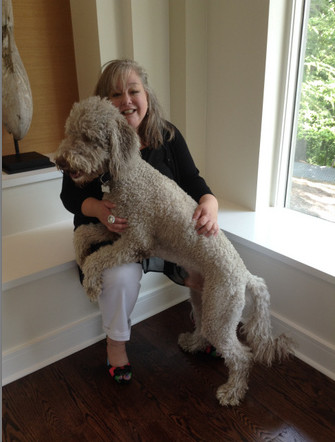 Pamela Grossman is an Innovator of Marketing Programs, Print TV and Radio Producer, Web Designer, Book Publisher & Unexpected Expert in Panic Disorder & ADA Law. As a public speaker, she inspires people to get out of their own way and become successful in business and life, regardless of their obstacles. She also educates Businesses and Government offices on ADA Law and how to comply as it applies to Service Animals.

A GREAT SPEAKER FOR YOUR GROUP

Pamela Grossman’s career spans more than 28 years with most of that time spent as a multimedia producer and strategic marketing expert, working with some industry giants such as Turner Broadcasting, Disney, Bellsouth and so many more. After developing severe panic disorder, Grossman had to reinvent herself to make her professional environment work for these new circumstances.

Enter the creation of her first company, In the Present  – a boutique Marketing & Production studio with clients Worldwide.
Pam’s struggle with panic disorder inspired her to launch her second venture, UnwrappingPanic.com, in January 2011. This online source for people with severe anxiety disorders provides comfort and information for people with the same struggles.
ITPVideo (a division of in the present) just completed production on a new training video that is going to help the lives of people with disabilities who have service animals. ADA LAW-The Training Video is now available for business owners as a tool for all their employees to ensure compliancy with the ADA Laws. This Training Video stars Milo the Service Animal along with HDTV’s renowned Broadcaster Host Joe Washington, Christy Baggett Georgia’s own Suzi Award Nominated Stage Actress, & Aimee Copeland along with some very talented Actors and actresses and their Service Animals. Her goal is to educate every business and government office on how to comply with the ADA Law.
Her talks are funny and entertaining. Don’t expect a power-point presentation, grab your drink and a chair and settle in for a fun interactive session with Pam as she chronicles her struggle and challenges from Producer to dealing with Panic Disorder to embracing being “In the Present”.  Some of the topics she covers are:

Pam is a native of New York and received her bachelor’s degree in television Production from the University of Maryland, College Park. She currently resides in Metro Atlanta with her Service Dog Milo & her canine companion, Sydni.

Warning: Missing argument 1 for wpshd_vcita_add_contact(), called in /home/content/82/9092582/html/adalawfordogs/wp-content/plugins/meeting-scheduler-by-vcita/vcita-utility-functions.php on line 419 and defined in /home/content/82/9092582/html/adalawfordogs/wp-content/plugins/meeting-scheduler-by-vcita/vcita-utility-functions.php on line 191